Brandon is a 24 year old aerial acrobat, currently living in Salt Lake City, but his story begins 10 hours south in the Phoenician suburb of Mesa, Arizona. Born and raised there, Brandon’s first experience with art, creativity, and performing came from sitting at his grandmother’s piano, where he would learn and play throughout his childhood. Very soon after, he found himself in the gym of Junior Olympic coach Christopher Sommer, where he trained in the Gymnasticbodies system for 7 years, and competed across the United States. With one foot in the world of music, and the other in athletics, Brandon brought his talents together once he got into high school, entering the world of music theater, where he was cast in roles such as Javier in “Les Miserables”, and Cinderella’s Prince in “Into the Woods”. Having fallen in love with the stage, he went to Brigham Young University after graduating, where he began studying in the Music Dancer Theater program. But on a snowy day in January of 2013, Brandon walked into his first aerial silks class, and out a changed man! He immediately made the decision to leave university, and move to Salt Lake City to train full time with Darla Davis at Aeris Aerial Arts. For the next two-and-a-half years, he studied in the disciplines of aerial fabric, straps, sling, chains, performed as the Principle Aerialist in Odyssey Dance Theater’s production of Thriller, as well as events for companies like Adobe and Mountain America Credit Union, until finally, in May 2015, he moved to Las Vegas to pursue life as a professional aerial acrobat. For the next 2 1/2 years he hustled to build his career as a coach and performer, working both around the world and on the world-wide-web to create a name for himself in the industry. 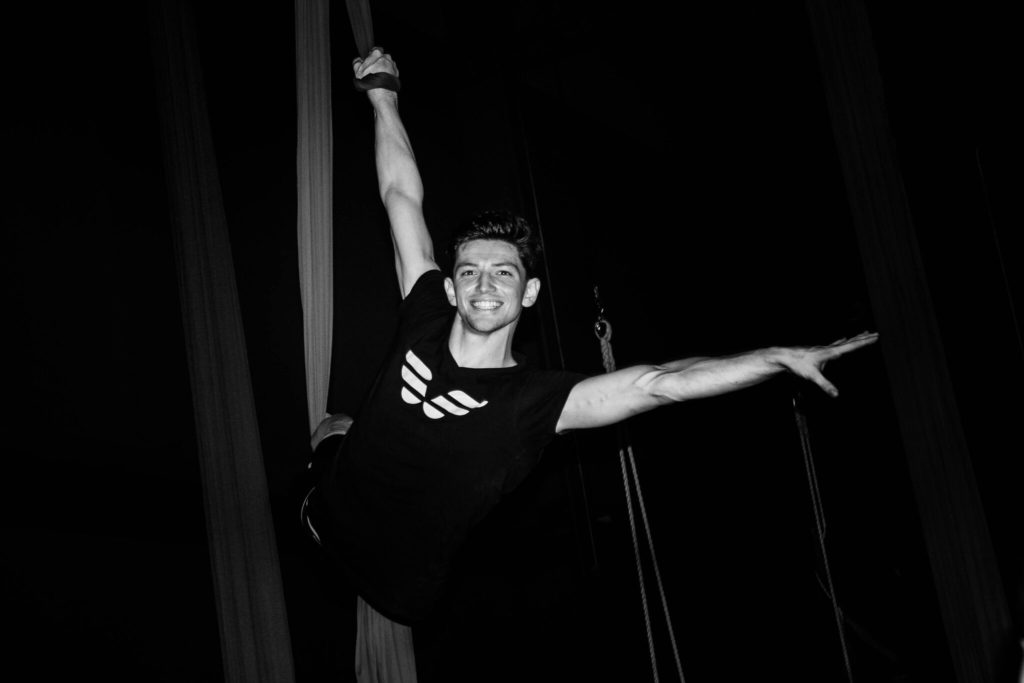 In March of this year, Brandon moved back to Salt Lake City with some incredible experiences under his belt. He is working at his home studio of Aeris Aerial in Sandy, coaching several weekly classes. You can check out his regular teaching schedule here. Once a month throughout the summer, Brandon is performing aerial ambiance at the SKYFALL events at Sky Club downtown. This is THE best time to see him truly in his element, performing for the public. On July 14th Brandon had the privilage of competiting in Salt Lake’s own local competition, The Aerialympics, and won a gold-metal for Hammock, and a silver one for Fabric. Additionally, he continues to travel and work with aerialists, next in the South American paradise of Ecuador. Brandon also performs daily for a following of nearly 60,000 from around the world on his Instagram.

In the near future, Brandon plans to continue working closely with his studio Aeris, most notably on their next full-length stage production of CHESS, to which he will be working on production, and performing as a Principle, the White King. He also continues to take on freelance performing gigs, as well as travel to teach workshops and private lessons. To get your studio or event into Brandon’s future schedule, shoot him an email!